The Clinic submitted a libel suit against this radio station for using a picture of a student wearing a hijab as an illustration of a Muslim woman who supports terrorism. In the suit, the Clinic argued that the reason that this picture was selected was that it depicts someone visibly Arab and that this constitutes defamation on the basis of ethnicity. The student involved in the case was compensated with 25,000 NIS following a settlement that was validated by the Jerusalem Magistrate Court. The verdict was covered by the Seventh Eye, an independent investigative magazine devoted to journalism, the media, freedom of speech and transparency.

The Juvenile Probation Services are a crucial component of the justice system determining the rehabilitation horizon of accused and their ability to have an alternative to arrest. A political science student and a law student are conducting an interdisciplinary research on the adjustments necessary for this service in order to be suitable for the various communities it serves.

Libel Lawsuits As a Vehicle to Fight Racis

The hidden aspects of racism make it difficult to legally fight it. In light of limited enforcement of the criminal offense of incitement to racism – it seems that the civil law might be an important tool to fight racism and discrimination. In particular libel lawsuits. Our law students will work on several such cases and will examine the limits and potential of using this vehicle.

Cultural Competency in The Public Space

Our students are designing and writing a newsletter that will summarize latest research and activities on issues of multiculturalism, discrimination and citizenship in Israel. The newsletter will be distributed digitally.

Openly and more subtly, the Israeli education system has promoted separation between children of Ethiopian descent and other Israeli children This has been a major point of contention within the Ethiopian community; they are sensitive to being labelled as ‘different’ in the public space, therefore, this issue was one of the triggers for protests that took place in 2016. Together with the Israel Association for Ethiopian Jews, we sought to change Ministry of Education policy regarding this issue. To support this advocacy, Clinic students and staff wrote a position paper entitled This is not the Way. It was presented to the Knesset where it was discussed in the Education Committee. The State Control Committee also reviewed the paper and its findings were widely covered in the media. The policy was subsequently changed but this change is not being fully implemented. Therefore, the Clinic has continued to advocate for full implementation of the new policy; a demand that was reiterated at an April 2018 discussion in the Knesset Education Committee.

The Clinic filed a legal case against the Ministry of Transport and Road Safety and security companies operating the Public Security Unit in Jerusalem. The petition details the ethnic profiling of a hijab-wearing Arab student that led to illegal search, delay, and use of force against the student. The case was supported by an information campaign on profiling entitled Stop Profiling: Look at Me which aims to increase awareness of this phenomenon. Students at the clinic, together with students at the Betzalel Academy of Art and Design created a video on ethnic profiling in Israel. To produce the video, Clinic students conducted interviews with individuals targeted for profiling and observed events at the Jerusalem Central Bus Station. Students also wrote stories documenting incidents where Arabs and Jews of Ethiopian descent were profiled. The testimonies, together with an analysis of models for dealing with profiling globally, were edited into a booklet on profiling in Israel, which was presented, together with the video, at a special event on profiling in Israel in June, 2017

Working with the Transgendered Community

The Clinic has been working to combat the continued stigma and harassment of transgendered persons, including police violence, experienced by transgendered individuals. Accordingly, they filed a complaint with the Department of Internal Affairs. This was followed by an indictment against a policeman who assaulted a transgendered woman, photographed her with her upper body exposed and then placed this picture on the internet. The Clinic also assists transgendered women and men in dealing with government-imposed barriers to gender reassignment.

The Forum of Israelis of Ethiopian Descent in the Criminal Justice System.

The Bio-Library took place in 2016 and 2017 as one aspect of the Musrara Mix Festival, in cooperation with Musrara, an arts school. Instead of books, the library hosted people from a variety of identities and backgrounds who shared their life experiences with "readers" or visitors. Accordingly, the audience was invited to hear the stories of people they are unlikely to meet in person, such as members of the African Hebrew Israelite community from Dimona, Bedouin Arabs, transgendered individuals, a Buddhist monk and asylum seekers. Students from the Clinic served as "librarians" and, in this role, facilitated visitor encounters with these “books.” Alongside interpersonal encounters, students and graduates of Musrara presented works of art on issues of identity. In 2017, the Bio-Library hosted a panel discussion on identity and labelling. These events were covered by the media, including Galei Zahal, I-24, Time Out, Haaretz, Portfolio Art Magazine, Jerusalem Net and Evensi.

In 2017, the Clinic held the bi-lingual Inti B'tichki Arabi event featuring art, academia and experiential learning of Arabic. The event sought to bring to the forefront the status of Arabic in Israel in general and on campus in particular. The event included an academic panel on this topic featuring Dr. Meital Pinto, Amer Dhamshah and Dr. Yoni Mendel and was moderated by Prof. Liat Kozma. Simultaneously, HU held an art exhibition featuring works by artists focusing on the theme of language. For example, the group Parhesia presented Through the Language, a visual dictionary of words in Arabic and Hebrew and Liron Lavi-Turkenitz presented a Hebrew-Arabic script that expresses the familial closeness of Arabic and Hebrew through orthography. Also showcased were works by the Egyptian typographer Mahmoud Tamam, with an experimental project that turns words in Arabic into a form that represents their meaning.

In an effort to add signage in Arabic to HU campuses, the Provost asked the clinic to provide the university administration with a list of the most urgent 50 signs requiring replacement. Students conducted research on this and produced a list; the university has since begun to replace suggested signs.

Students have been assisting Israelis of Ethiopian descent in uncovering information about family members who are considered to be Falash Mura [Christian converts to Judaism]. There are hundreds of such individuals, most of them with relatives in Israel, waiting in camps in Gondar and Addis Ababa for a decision allowing them to immigrate to Israel. The Clinic asked the Population and Immigration Authority about the status of these applications and discovered that most of them are not being considered for immigration nor are their requests being processed. In a special evening organized by the Clinic, students helped families in requesting information about the status of their families' applications with a secondary goal of flooding the Authority with petitions and raising awareness regarding this overlooked issue. 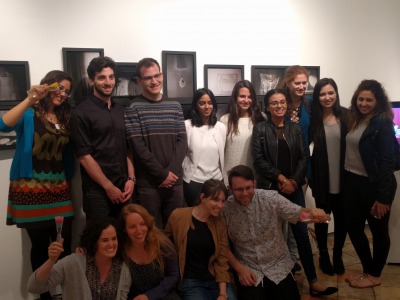 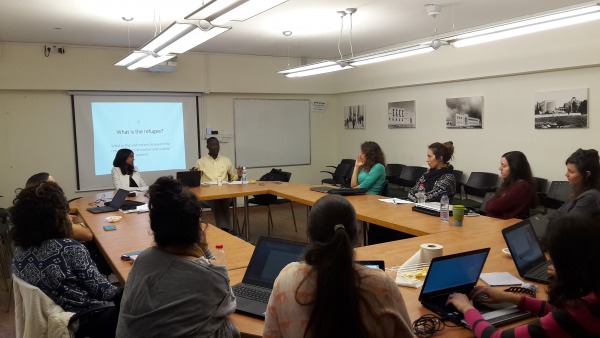